I’m with Mr Monkton – Let us be lovely 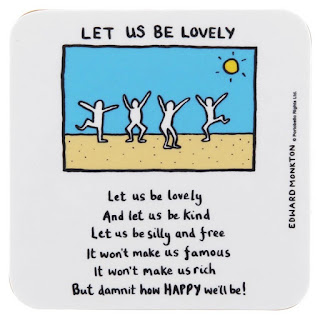 Sometimes, no matter how you look at the world – via print, online or just out the bus window, there is evidence that the world is not operating to the best of its capacity.

Basically, it could be a whole lot nicer if people focussed on being lovely. Like a lot.

I don’t know if you know about Edward Monkton, a genius man who sums up the right approach to life with a few lines, sometimes a dinosaur and often with shoes.  Like Leunig, he is a man who has a gift for seeing the world in a way that makes a lot of sense.

Go to edwardmonkton.com.au for more of his stuff.

Can you imagine a world where this is our approach.  Loveliness, Kindness, Freedom.  All the days of our lives.  A bit like anarchy but without the inherent narcissism – this would be my utopia.

No violence.  No nasty politics.  No bitchy remarks. No second guessing.  No random deaths. No queue jumping.  No mocking the homeless or the differently coloured or the differently faithed. Respect would proliferate.  Kindness would rule.  People would use nothing but temporarily cross faces and emphatic tuts to express disapproval and people would be open to communicating so that every ending was a happy one.

And as Mr Monkton would say – let there be shoes and chocolate. Because even those that are happy with their lot and the blessings that come with it, like nice shoes while disliking killer potatoes.

There is much to be said for that I think.