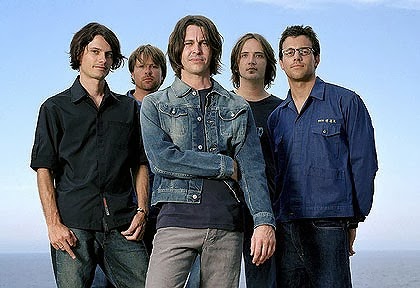 So back on New Year’s Eve in 2000, a friend and I accepted an invitation by a member of the band Powderfinger to go to a party at the drummer’s house. We did. Forgot to be cool, drank too much and took ourselves off home just before midnight to ensure we left with some dignity having giggled our way through the evening attempting to imitate the on trend loucheness and bored stares of the consciously trendy. Achieved nothing but ‘drunk’.

To give some context – Powerfinger were at the height of the heights – the following year (2001), they would go on to win Album of the Year (Odyssey Number Five) and Single of the Year (My Happiness).  I didn’t mind them but I still had more chance of knowing the lyrics to Meatloaf, Gilbert & Sullivan or That Mambo No 5 album.

I never said I was cool back then.

However, I was being invited to parties by rock stars.  The fact that I was briefly living next door is not the point. I. WAS. INVITED. TO. A. ROCK STAR’S. PARTY.

I was in my mid 20s, I had just ended a year of extensive travel, moved cities, was soon to be (unbeknownst to me) single and life stretched out ahead of me.  Future unknown.

Fast Forward to the New Year’s Eve just gone and my lubbly jubbly husband and I are sitting on the hill at Woodford Folk Festival, our babies asleep beside us, listening to the 2013 ARIA Song of the Year winner, Matt Corby, belt out his song Resolution.  Young girls swooned, thousands of voice sung along with him and it was a moment of pure contentment.  My happiness in fact (see what I did there?)

So, I had made the decision to go and watch his performance that night not based on my own swooniness for the young man, but because I am friends with his aunt and his mother AND I REALLY LIKE THEM, so I wanted to make sure I had seen him and could say doting, meaningful things when I next saw them along the lines of “Sung well, appeared to have recently showered and was apparently sober, perhaps needs to shine his shoes.”*

There it was. The subtle shift. A life stage.

I’m not even 40 and I have moved from partying with rockstars to partying with their mothers and aunts. (Who aren’t old.  They just had babies when they were babies themselves).  And they know how to party.

I am aware that when my daughters’ become rock stars I’ll almost be able to get into the gig venues at a senior’s rates.

I am possibly going to be like the mother at last night’s Arcade Fire concert who BOUGHT A BOOK TO READ in the first row of seats.  WITH A BOOK LIGHT. While the young things she was supervising danced like the demented poppets they were.

This week I won the prize for guessing who was going to win Triple J’s Hottest 100.  Which makes me mainstream yoof!

And yet, I am old enough to deliberately wear Converse shoes to see gigs because THEY ARE COMFORTABLE.

I say things to my children like “Manners are free”, and yet I haven’t stopped yelling profanities at the newspaper whenever it reports something new and even stupider that Abbott or Morrison has said.

It’s like I’m morphing into an adult.  A real live grown up.  And I’m really not ready.  Not ready at all.

*Matt Corby if you EVER read this please note I did not really report like this back to your Aunt and Mum. I couldn’t see your shoes from where I was on the hill.